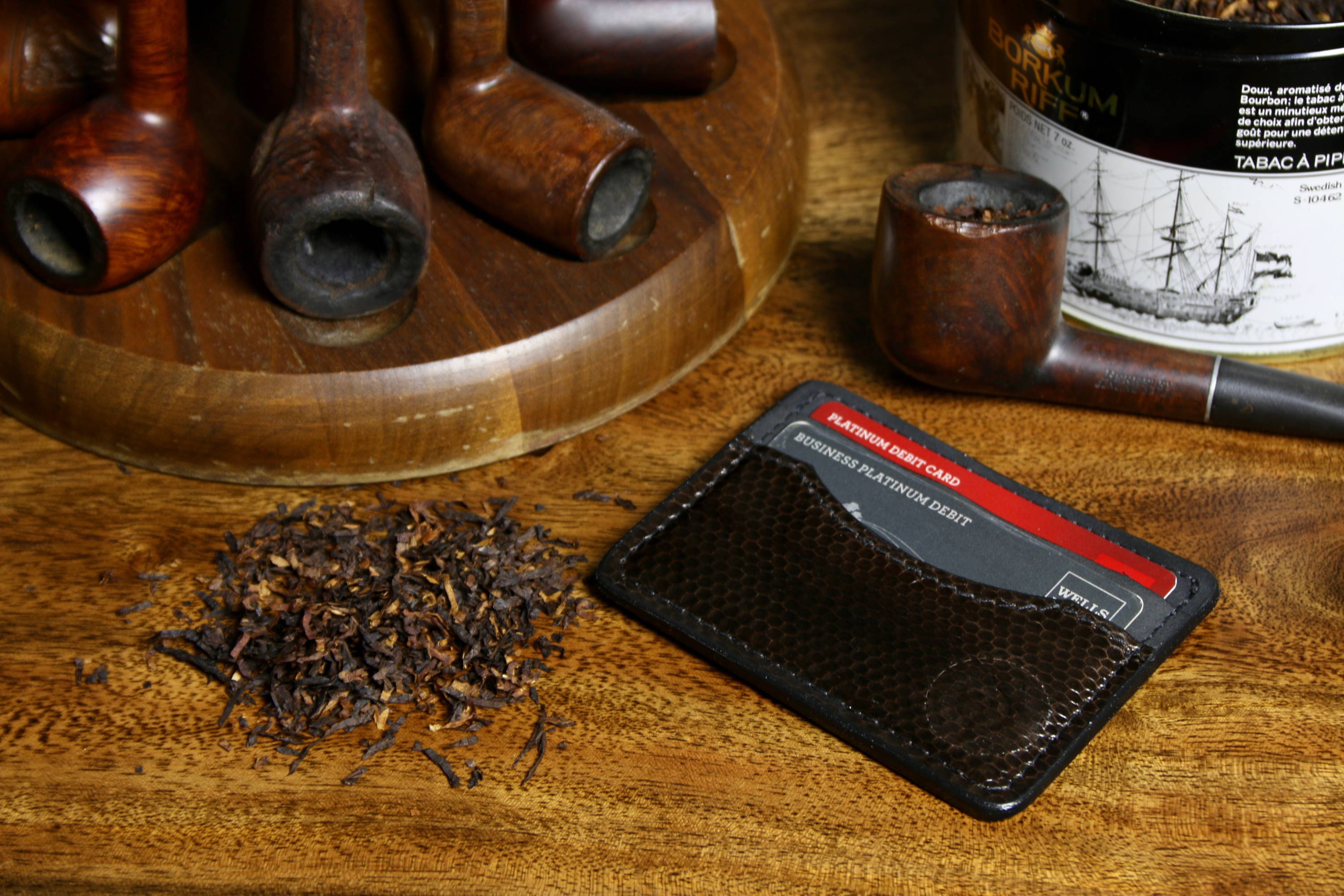 The "Heir To Medusa" Snakeskin wallet is comprised of hand wrestled sea snake leather - While Capt Bligh was on his last voyage, his mast was struck by lightning, which crippled his ship and forced him to seek refuge on the Sarpedon Island. After repairing his mast, he returned to his ship to discover that his crew had been turned to stone. Medusa was waiting for Bligh in the Captain's quarters. She, like many women, had a crush on Bligh and intended to force him to marry her. Bligh was not fooled easily for this was not his first engagement with a goddess. With no choice but to tell his first and only lie, Bligh led Medusa to believe he would wed her the following morning. That night, Bligh snuck out of his shackles and heroically choked her head off of her shoulders. Like many of Bligh's voyages, he returned to port with treasure, this time... with Medusa's head. A piece of Medusa can now be yours.

Though this wallet may look mean, the durable snakeskin and cowhide leather is soft to the touch and wonderfully pliable. This sleek and lightweight wallet is made with the toughest part of the hide to neither tatter nor fall apart. Rest assured, your credit cards are protected with our RFID blocking lining.

Dimensions - This wallet is 4 inches wide by 3 inches tall.

The North Pole is not the only place with a magical workshop - Discover the tale of Southern Trapper and the magical craftsmen behind it.

Our philosophy is simple - Exceed your expectations no matter the cost. We'll never mass-produce, we'll never sacrifice quality, and nothing will ever leave our shop unless we're certain it will last 100 years. Every piece of leather is built with pride and integrity to provide a lifetime of satisfaction. We're so confident in our talented craftsmen, durable materials, and outstanding designs, that we warranty them against workmanship for 100 years.

When your guard is down, this wallet has you covered. Our wallets are lined with an advanced metal fabric that prevents radio waves from penetrating the wallet walls. Our highly conductive RFID-blocking wallets are made from the same technology used to protect astronauts in space.

This credit card wallet has two compartments on each side and a hidden center compartment for cash & business cards. Once broken in, each compartment will hold up to 4 cards, allowing you to carry 20 cards. For a minimalist wallet, this wallet has outstanding functional capacity.

Made from the finest genuine leather, this wallet is full of character, like many of the gentlemen we proudly serve. The soft and durable leather makes for a comfortable and reliable wallet. No more frayed edges or torn seams, this wallet is ready to outlast all that has come before.

There are few things that you’ll never let go of or forget, such as memories and time-proven leather. We hope you use our soft and durable leather goods to create memories in the wild that you’ll carry with you everywhere you go. Memories of times spent smoking venison or wild-hog bbq with your family and ole hunt’n buddies. Often times, it’s memories like these that are harder to procure than the wild hides themselves.

We coat our wallets with a non-toxic damage-resistant sealant to increase its longevity. The marine grade resistant finish provides protection against rain, sleet, and snow. You’ll fall in love with this leather wallet, which ages with a natural patina that will enhance with wear.

As stewards of the land, we share your same values for proficiently using all byproducts in humane and ethical ways. Our wild hides are sustainably sourced and humanely harvested across the country from hunters and trappers. The texture of our wallets are as rich in character as the landscapes these animals are native to, and we’re committed to ensuring their flourishing future.

Our wallets tell stories of majestic wild animals that were harvested sustainably through national wildlife programs. We’re committed to supporting nonprofit groups that improve wildlife conditions and advocate for nature. At checkout, you’ll choose a conservation group to donate 1% of the order toward - together we’ll make sure our beautiful world continues to flourish for future generations.

Made With Pride in the USA...

We never sacrifice quality and never mass produce - Nothing profoundly satisfying happens overnight, including our wallets. Our team of master craftsmen delicately handcraft each wallet entirely by hand. While you may think we’re out fishing, we’re actually meticulously perfecting your wallet to ensure it provides generational satisfaction. Your grandkids will enjoy it as much as you did.

Field tested by Dads, Cowboys, Professional Athletes, Game Wardens, and by our nation’s War Hero's, our collections will outlast and outperform all. Like a great hunting dog, our wallets are there when you need them. We’ve spent months in development by spending weeks in the duck blind, days in deer stand, and weekends on the river, all to ensure each product will withstand a lifetime of abuse.

Based on 1 review Write a review
Sold Out

The "Heir To Medusa" Brown Snakeskin Credit Card Holder Wallet
$64.99
Orders will be processed in USD.